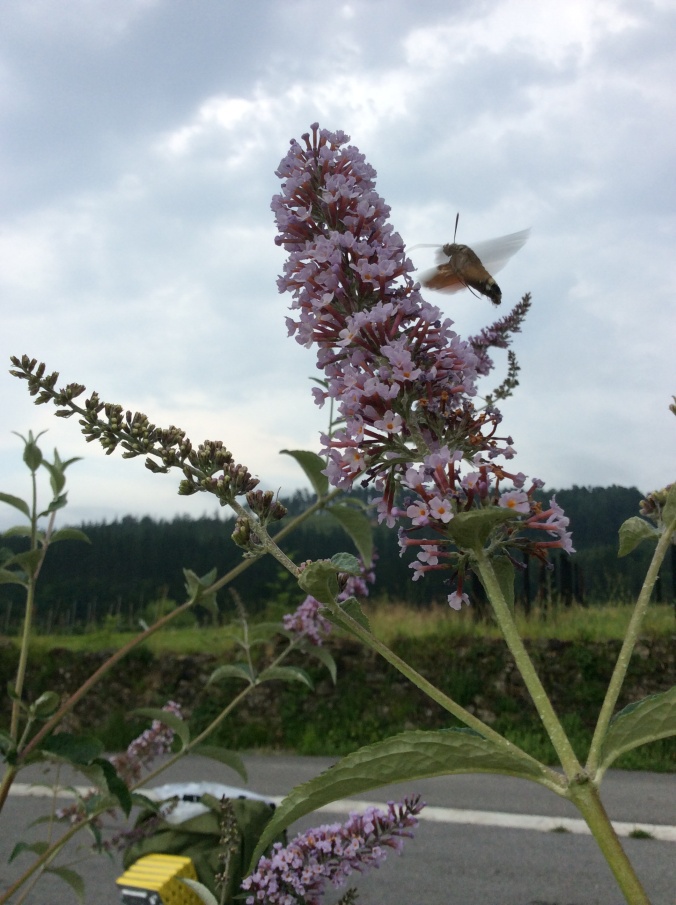 A couple of days ago as we descended the steep slope into Deba in the late afternoon I paused to peer over a tall rock retaining wall next to a modern apartment building while waiting for others to catch up. There were a bunch of Butterfly Bushes (Budelaeia?) twenty feet below all abuzz with insect life. One member of the assembly looked at first like a moth that moved like a humming bird from flower to flower. I called Daisy over and she said, “That is a humming bird!” I said, “No way! It is so tiny!” There were at least a dozen of them hovering and going from flower to flower with iridescent golden backs and what looked like short little black tails. They had long slender “beaks” to drink nectar with, too. One of them flew up a little closer and we could see the iridescence through the blurr of its wings, the body smaller than the tip of my little finger. I said, “It is a humming bird! That is the tiniest bird that could possibly exist!” We called Linden and Kelley over to see our remarkable discovery and they saw the tiny humming birds, too.

Then today I got a much closer look and some pictures. It is pretty obviously a moth in the pictures, but still amazing with its long proboscis and it’s blurr of hovering wing beats. But the uncanny thing is how much it moves like a humming bird. It is amazing how a creature in a completely different branch of evolution develops so identically, down to the way it moves through space in little hover moments interspersed with super quick darts here and there. A bird and an insect developing in form and function toward an almost indistinguishable pattern . . . . .

This site uses Akismet to reduce spam. Learn how your comment data is processed.